If you’re retelling a story from your past, not only should you be able to transport yourself back to the very place and time of the event, but the person you’re relaying the story to should feel as if they were there with you.  Even if it’s fictional, it must ring true to both you and your audience.  Let me give you an example.

I went hiking in Catoctin Mountain Park this past August.  I hadn’t been hiking there since the previous fall and was anxious about walking the paths I know.  This may sound silly, but I feel a real connection when I hike there, something that refreshes my psyche.  I left my house at approximately 7:45 am to insure I would have at least the beginning of my trek to myself (it’s a 45 minute drive and usually I’m the first on the trail).  True to history, I was the only person at the mouth of Hog Rock Nature Trail when I arrived at the parking area off Park Central Road.  My plan was to hike the trail to the vista and then continue on towards Cunningham Falls.

It was unseasonably cool that August morning so I grabbed my gray fleece vest from the backseat of the car.  I zipped it up and then opened the trunk to don my hiking boots and backpack.  I snuggled into my new gargoyle-colored boots, bounced my heels up and down a couple of times to admire how good they felt on my feet.  I juggled the backpack onto my shoulders and then picked up my hiking poles.  I know it’s a “girl thing”, but I couldn’t help thinking how fantastic it is that the shades of gray and purple in my boots, backpack, and poles were coordinated.  Slamming the trunk shut and locking the vehicle, I couldn’t help smiling as I moved onto the trail.

Not ten seconds into the walk and stopped dead in my tracks.  I gazed around at the mountain landscape, barely recognizing the trail I have walked many times over the past years.  Treepocolypse – the name given to the devastating ice storm we suffered early in the year – had ravaged many of the trees.  I felt a heavy weight on my heart as I looked left to right, breathing in the sadness of so much loss.  I walked on for a few minutes and stopped to assess what had happened over the past many months.  A good number of the trees had been cut into large logs which were heaped in small piles away from the trail.  Some logs had been used on the path to mark or ease the incline/decline.  However, it seemed that many more of the trees were frozen in time at the moment of the storm – countless numbers of them leaning, pulled up at their roots, wedged precariously against neighboring trees; many more laying flat against the mountain floor.  I sighed deeply.

As I walked on towards the vista I could hear rustling in the grass to my left.  I stopped.  A chipmunk scurried away.  Birds chirped from high in the trees, probably alerting those ahead that there was an intruder in their midst.  I looked up towards the treetops which were dark against the cloudy sky.  I could hear the birds but couldn’t see them.  None of them were flying.  Odd.  I continued on, paying close attention to the trail beneath my boots.  Spider webs clung tightly to clumps of leaves.  The first of yellow and green and brown leaves littered the trail.  No sounds but occasional rustling leaves and the birds.

I wandered off the trail about midway to the vista just to see a large rock formation colored with moss.  I snapped a picture with my phone.  I turned and took a few more shots of tree trunks held up precariously by other trees standing tall against the dead weight.

I reached the vista and stood there for five, maybe six minutes.  It was just cloudy enough that visibility was reduced to the point of not seeing much beyond a mile or so.  I looked down at the landscape directly below the vista and saw dozens of fallen trees littering the mountainside.  So much destruction!  Again, I sighed deeply but admitted that this is a natural thing for nature to make way for new growth.

I moved on past the vista along the trail towards the tiny sliver of a creek which runs down off the trail, the place where I’ve sat many times on the largest of the stones and contemplated nature while listening to the water trickle over the creek bed.  When I reached my destination, my mouth dropped as I stared at the mud and the little puddle of water no larger than a quarter.  What was going on up here in Catoctin?

I was glad I had the trail to myself.  I had a tarot reading in Gettysburg two weeks prior.  The reader said that I would experience something wonderful in a form of communication with nature if followed her instructions, and I knew that I would only do so if no one else was around.  I dropped my backpack and pulled out a packet of loose organic tobacco which she had told me to purchase if I could find it (which I did at a tobacco store near my house).  I gingerly opened the blue plastic envelope and scooped up a handful of the sweet smelling stuff.  Carefully, I sprinkled it in a large circle that spanned the width of the trail.  I replaced the packet and then knelt down within the circle, knees first, and then resting my palms on the mountain.  I closed my eyes and tried to become one with the natural forces surrounding me (this is what the reader had told me to do).  In less than a minute, I could feel the pull of something move from the ground and upward through my body.  I felt as if something inside of me was being pulled upward, gravity meaning nothing at this point to whatever was releasing itself through me, from me.

I jumped up, a little startled at the feeling that had consumed me.  But I was curious – was this all in my head, or did it really happen?  I assumed the same position as a minute ago, and again felt the same force making its way from the mountain through me and upward.  Craziness, I though.

I stood, and with my feet I swept the tobacco towards the edges of the path.  I considered what had just happened, wondering if it due to the lack of coffee (I never drink the stuff prior to a hike), or if something spiritual had happened.  Knowing I would never really know for sure, I trekked back to my car.  On my way, I took some of the more interesting stones from the path and tucked them into the pockets of my backpack.  Souvenirs of most curious hike.

Off in the distance I could hear a couple of motorcycles making their way down Park Central Road.  They drove along, and then I heard the engines idling.  They had stopped somewhere not far from where I was.  I got a chill, not from the air, but by recalling the “Dateline” episode where a serial killer was torturing and murdering hikers in the southeast.  You know, I’d never been concerned about hiking alone prior to viewing that episode.  However, I shrugged it off.  It’s either hike alone or not hike at all.  I choose the first option every time.

So that’s the end of the story.  Did it feel real to you?  Was I able to transport you to Catoctin, and were you on the hike with me?  How much of the story do you think was fact, and how much was fiction? 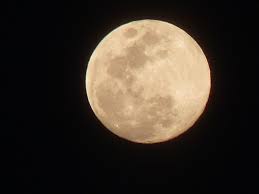 I walk from the office upstairs down to check on Buddy (my dog).  The deck door is open to let the cool night air in.  As I cross from the hallway to the family room, I do a double take – the full moon is suspended high above the deck, a glowing ecru orb in the sky.  I stop, take a deep breath, and smile.  I love looking at the full moon!

Every night lately when the sky is clear, I find myself seeking out the moon to check what phase it’s in and how bright it is.  I mean, I’ve always looked out to see if the moonlight is shimmering on the little creek of water in my backyard or if the fireflies are competing with the flickering as the leaves on the trees dance in the moonlight.  Recently though, I feel compelled to check the sky before I slip under the covers for the night.  I’m finding some type of comfort in knowing that nature is so beautiful and that it’s right here, all around me.

And to make this post even a little more odd, a couple of weeks ago I went hiking in the Catoctins.  Remember treepocolypse earlier this year when the ice storm took down a lot of trees?  Well, the Catoctins were not spared.  I barely recognized the Hog Rock trail for all the trees toppled over and sawed to make a clear passage.  I actually felt sad as I looked around.  So much devastation!

Is it a “mom” thing that I feel this way – or it is an “age” thing?  Not sure, but either way, I love this connected feeling I’m having lately.

I took these pictures with my phone during a recent incoming storm.  I was heading out of the house and just had to grab these shots before they disappeared.  I haven’t photo shopped these except to reduce their image size.

I’ve been on vacation this week and getting tons of stuff done around the house.  Mostly, I’ve been spending time in the backyard – sanding and staining portions of the deck, weeding, cleaning up the backyard.  Josh has been helping a bit too.  Of course, taking some time to sit patiently and wait for candid bird photos is particularly enjoyable.  I usually post the pictures on Facebook, but today I decided I’d post them here instead.

And here’s one of the roses on the rose-bush I bought from Wal-Mart several years ago.